In June 2016 the College was shocked and saddened by the death of Jo Cox MP, who joined Pembroke as Jo Leadbeater in 1992.  Since then, it has been wonderful to see how the entire College Community has come together.

Part of the College’s response to Jo Cox’s death has been to establish the Jo Cox Studentship, which seeks to raise at least £120,000 to fund a PhD scholarship in the study of refugees and global migration at Pembroke, as part of the Cambridge Migration Research Network.  We’ve been extremely proud of the amount of support this studentship has had from the College community, not least from students who have taken it upon themselves to arrange fundraising initiatives.

The start of the academic year, Freshers’ week, is filled with events designed to help welcome new students.  But this year it also included a jumble sale in aid of the studentship.  Individuals donated items at the end of the 2015-16 year, and while some were handed on, others were sold throughout the first week of term. 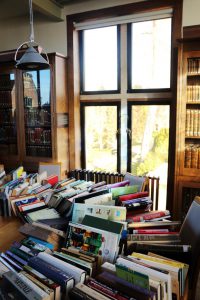 The next student-led fundraiser came from Pembroke College Boat Club (PCBC), and was a joint initiative with the boat club of Pembroke College Oxford; rowers set up ergs in the Nihon Room, arranged a livestream, and proceeded to row the equivalent of the distance between the two Colleges.  Oxford’s team raised money for the Oxford Rape Crisis Centre. They raised over £500 through their efforts (and beat the Oxford team to the finish line!)

The library was next, organising a sale of books in the Yamada Room, raising a total of £500 over five days.

Like the ergathon, the annual charity cycle ride involves 80 miles between Oxford and Cambridge.  Unlike the ergathon, there’s no swapping out (luckily, cycling is less intense than the ergs) and it doesn’t take place indoors.  This year over 20 members of the College community took to their bikes, managing to raise over £5000, an excellent result. You can read an account of the day here.

Most recently it was the turn of the graduates, who raised £1400 by auctioning off everything from food and drink to a personalised tour of the Fitzwilliam Museum and 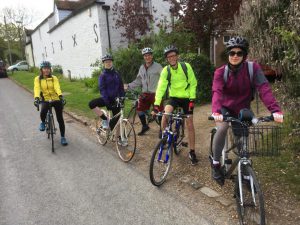 “a rather dashing hat”.

Thank you to everyone who has contributed, whether that be by organising an event, donating an item to be auctioned, or donating money. Your support is deeply appreciated.