Pembroke Shahnameh Centre for Persian Studies has grown out of the Cambridge Shahnama Project (currently 1 Fitzwilliam Street, Cambridge CB2 1QH), and represents the fulfilment of one of the original aims of that project, to promote Persian studies in Cambridge and across the UK. Its activities include termly lectures on Persian and Islamic art, academic conferences and publications and other cultural events, like art exhibits and musical performances.

The seeds for the Centre were planted in 1999, when Professor Charles Melville (Pembroke College, 1969) initiated in collaboration with Professor Robert Hillenbrand of Edinburgh a five-year research project which was supported by the British Academy. The project aimed to create an electronic database of illustrated Shahnameh manuscripts held in the museums, libraries, and other state and private depositories across the world. 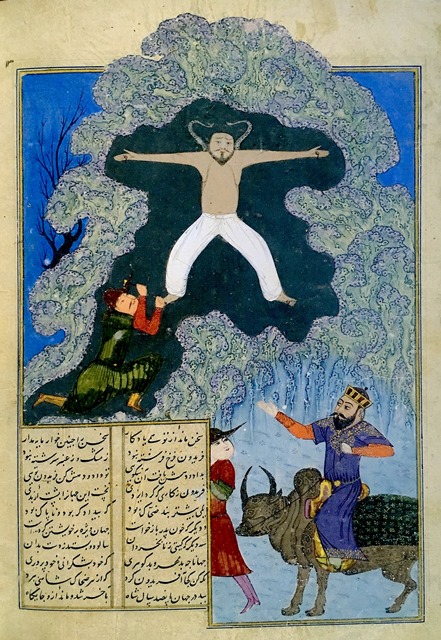 Kem (Kimon Evan Marengo, 1907-88), Zahhak as Hitler with the snakes hanging down from his shoulders with the portrait likeness of his allies Mussolini and Konoe. This image was a part of the series of six posters prepared for the meeting of Churchill, Roosevelt and Stalin (depicted here as Persian King Faridun the liberator) in Tehran in 1943. KEM who was a political cartoonist working for the British Foreign Office during the W.W.II produced these posters with the help of Cambridge Professor Arthur Arberry, Fellow of Pembroke College and Professor of Tehran University Mojtaba Minovi

The Persian epic poem Shahnameh, (The Book of Kings, or the King of Books) was completed by Abu'l-Qasem Ferdowsi in Tus around 1010. It can be considered the Persian Bible as it traces the history of Iranian civilisation from the creation of the world to the fall of the Sassanid Empire and the Arab conquest in the seventh century. It is a work of fundamental importance to Iranian cultural and national identity,

There have been hundreds of manuscripts of this poem produced since the 11th century, the earliest of which (1217) is now kept in Florence. As far as Ferdowsi’s autograph does not survive, the discrepancy between various versions of the text is enormous; their size varies between 40 000 and 80 000 double verses (bayts). This would make the Royal chronicle the longest ever written poem by a single author in the whole history of humankind.

The whole international team of scholars was working on the project since 1999 in various museums, libraries and private depositors over the years, aiming to establish the relationship between the text and its images: why particular scenes would acquire hundreds of illustrations, and why some would be completely ignored, or avoided by the medieval artists. Apart from the universal themes, like love and death, devotion, sin, and betrayal, there are several which are particularly prominent in the Shahnameh. One of them is the idea of martyrdom of several heroes and princes, like Iraj and Siyavush whose images are related to the ancient pre-Islamic and even pre-Zoroastrian cultural tradition which used to be represented on the vast territories, including Transoxania, or Mawarannahr in Central Asia. Ferdowsi's language (Classical, or early New Persian) became dominant in three major Eastern empires of the Safavids, the Ottomans and the Mughals.

Now it is not only the region between Iran, Afghanistan, and Tajikistan but vast Iranian communities outside the country, mainly in Europe, America and Australia. Many contemporary artists, like Siamak Filizadeh or Farah Ossouli use the pictorial paradigm of the mediaeval Shahnameh miniature paintings in their witty and exciting art. Among the latest and the most impressive exhibitions of this kind is the latest show in Los Angeles: In the Fields of Empty Days: The Intersection of Past and Present in Iranian Art (http://www.lacma.org/art/exhibition/fields-empty-days).

With the support of the British Academy, Iran Heritage Foundation, and several other private institutions around the world, the project developed from a database to a website which is now an extremely useful tool both for scholars, mainly in art history, literature and history, and the wider public.

In 2010 the Millennium since the completion of the Ferdowsi's poem was marked with the first iteration of the Shahnameh Centre and collaboration with two important exhibitions of the Shahnameh manuscripts and artefacts from the British collections at the Fitzwilliam Museum in Cambridge (curated by Dr Barbara Brend), and the contemporary Shahnameh in the Prince’s Gallery in London (curated by Dr Fatima Zahra Hassan).

Bita Daryabari's very generous donation of $2 million in 2014 enabled the transformation of the Project into the Shahnameh Centre for Persian Studies based in Pembroke, and widen its activities from Shahnameh studies to several other multidisciplinary academic and cultural projects. Ms Daryabari has always been interested in encouraging wider knowledge and appreciation of Persian culture outside Iran, where she was born. She has also made substantial gifts to three Californian universities, including endowing a chair in Iranian Studies at UC Berkeley.

The growing Shahnameh Project database remains the core project, which continues to be led by Professor Charles Melville. The Project database has about 20,000 publicly accessible images, from manuscripts held in 36 different countries. There are still many manuscripts extant, particularly in Iran and India.

While work on the Shahnama Project and completion of the database will continue to be one the main aims of the Centre’s activity, a number of new initiatives are planned that broaden the scope of its research (e.g. the sub-project "Literature, Art, and Diplomacy in the early Qajar era", sponsored by the British Institute of Persian Studies), emphasising the continuing importance of the Shahnameh phenomenon and its world today, and promoting Persian studies more widely through a programme of conferences, lectures and outreach events. In October 2013 as part of the Centre's outreach programme there was a performance of "Zahhak, the Dragon King of Persia", on the initiative of the young Cambridge composer Dr Hossein Hadisi (http://www.cam.ac.uk/research/news/enter-zahhak-dragon-king-of-persia).

One of Centre's sub-projects entitled "Shahnameh Forever", has already held three exhibitions since 2011: 'Illustrating the Shahnameh in the 21st century', 'Shahnameh: Time forward', and a one-day exhibition on the occasion of the official inauguration of the Centre, curated by Dr Veronica Shimanovskaya.

Due to joint research activities, the Centre has established fruitful relationship with several institutions in the UK, Iran, Georgia, Russia, Kazakhstan, Estonia, Latvia, Lithuania, and several other countries.

The exhibition on the contemporary perception of the Shahnama ("Shahnameh, the perpertual narrative") was organised by Nazila Noebashary and Akram Tavana at the Aaran Gallery in Tehran in early March 2016, accompanied by a catalogue with an introduction by the Centre's Director of Research Dr Firuza Abdullaeva (available to download here).

The Centre is acquiring an excellent library of books and other publications, both printed and digital, on Persian and Islamic art as well as works devoted specifically to the Shahnama, which started to be catalogued with the help of Dr Peyvand Firouzeh, Cambridge graduate and is currently being continued and soon to be put online. We welcome visiting scholars to come and make use of these and other resources available.

The Centre has been the home for the three-year Fari Sayeed research fellowship to initiate a teaching programme in Islamic art history to undergraduates enrolled both in Oriental studies at FAMES (Faculty of Asian and Middle Eastern Studies), and the Department of History of Art. Pembroke's first Fari Sayeed Visiting Fellow in Islamic Art, Dr Ünver Rüstem, was appointed in October 2014 and offered two very successful courses on Orientalism and Text and Image in Islamic manuscripts. He has now moved on to a full-time post at John Hopkins University in Baltimore and was replaced for one academic year by Deniz Turker, who was completing her PhD at Harvard.

The one-day conference "Islamic Art at Cambridge: Lifting the Veil" was organised in Pembroke by Dr Ünver Rüstem on 20 June 2016 jointly with the Department of Middle East Studies, the Department of the History of Art, and the Fitzwilliam Museum. It aimed to celebrate the resources of Cambridge in this field, related both to the museums and libraries collections, and the achievements of local experts and former students.

Dr Rüstem helped to establish a new lecture series, Cambridge Lectures in Islamic Art (CLIA), under the auspices of which quite a few lectures by prominent colleagues in the field have been given at the Pembroke Centre: http://persian.pem.cam.ac.uk/news-and-events/lectures-islamic-art

Thanks to the support of our benefactors the Centre has already accumulated a representative collection of mediaeval and cotemporary Persian art.

Ferdowsi presents his Shahnameh to Sultan Mahmud of Ghazna. Shahriar Shahnameh. Shiraz, 17th century. The manuscript, which has 32 miniature paintings, is a very generous gift donated to the Centre for its inauguration on 24 May 2014 by Ali Akbar Javad in memory of his brother who passed away on 2 March 2014 © Pembroke Centre for Persian Studies

Among them the Shahriar Shahnameh manuscript (http://persian.pem.cam.ac.uk/news-and-events/shahriar-shahnama) donated through the Cambridge in America by Mr Ali Javad in memory of his late brother,  paintings, and artefacts in ceramics and bronze by Veronica Shimanovskaya, Sergey Feofanov, Vyacheslav Zabelin (VIK), digital prints by Farah Ossouli, SIamak Filizadeh and several others. The Centre has been given by Ameneh Gharavi of Canada and her family on temporary loan four folia from one of the earliest surviving manuscrpits of the Shahnameh, so-called Cama manuscript as well as a very interesting copy of the 15th century.

Farah Ossouli, Love and Death from the series "Destiny of the women in the Shahnameh", 2007, 110 x 75 sm, gouache on cardboard, digital print © Pembroke Centre for Persian Studies

2019 will mark the fifth anniversary of the launch of the Pembroke Shahnameh Centre for Persian Studies.

The Centre’s various activities continue to be initiated and supervised by its Director of Research, Dr Firuza Abdullaeva, who joined the Project in 2002 as Associate Professor of St Petersburg University and then University Lecturer (Associate Professor) in Persian literature at the Oriental Institute, University of Oxford and Fellow of Wadham College where she was also Keeper of the College Persian Library named after Ferdowsi. To commemorate the 400th anniversary of Wadham College she welcomed the initiative of the Iranian embassy in London to erect the sculpture of Ferdowsi in the Wadham Persian Library in 2009.

Looking beyond the Centre's 5th anniversary, Dr Abdullaeva hopes to expand their activities and establish a publication series, as well as focusing on other works of Persian literature, history and art. Among them are the papers of E.G. Browne (1879), the founder of Oriental studies in Britain at the university level. His prominent successor, Arthur Arberry (1913), strengthened Pembroke’s commitment to Persian studies, a tradition that has been maintained by Charles Melville, who held the post of Professor of Persian History in Cambridge between 2008 and 2018. He will still be very much involved with the Pembroke Shahnameh Centre, with a new project focusing on illustrated chronicles of Persian history.

Dr Abdullaeva-Melville is a graduate (BA, MA honour) of the Iranian Philology Department, Faculty of Oriental Studies, St Petersburg University, where she received her PhD in Iranian philology, Art and Islamic Studies in 1989. She was an Associate Professor at the University of St Petersburg when she joined the Cambridge Shahnama Project in 2002 after a term at the Institute for Advanced Study (Princeton) and a term at the University of Michigan (Ann Arbor) as a Fulbright Professor. From September 2005 until September 2010 she was Princess Ashraf Lecturer in Persian Literature at the University of Oxford and Fellow and Keeper of the Ferdawsi Library of Wadham College. In 2010 she became the Iran Heritage Foundation Research Fellow at Pembroke College, Cambridge. Since September 2013 she is the Director of Research of the Pembroke Shahnameh Centre for Persian Studies. Her main research interests include Classical Persian literature, Medieval Persian book art and codicology, Russian-Iranian-British cultural and diplomatic encounters of the early Qajar period, Persian literary classics in contemporary art and Russian cultural Orientalism in Iran, Central Asia and the Caucasus.

More information on the work of the Pembroke Shahnameh Centre can be found at: http://persian.pem.cam.ac.uk/

The database of images of the Shahnameh can be viewed at: http://shahnama.caret.cam.ac.uk/new/jnama/page/

About
Projects
News and Events
People