Foundation and the first buildings 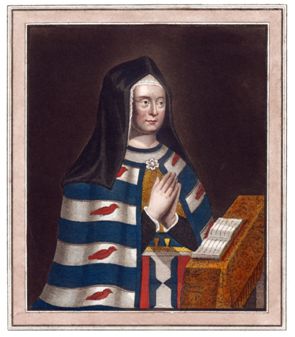 On Christmas Eve 1347 Edward III granted Mary de St Pol, daughter of Guy de Chatillon and the widow of Aymer de Valence, Earl of Pembroke, a licence for the foundation of the College. Pembroke is the earliest Cambridge College to survive today on its original site with an unbroken constitution from its first foundation. The original buildings comprised in a single court (now called Old Court) all the component parts of a college - Chapel, hall, kitchen and buttery, Master's lodgings, students' rooms - and the statutes provided for a manciple, a cook, a barber and a laundress. Both the founding of the College and the building of the Chapel - the first college Chapel in Cambridge - required the grant of a Papal Bull. The original Chapel still exists and is today known as the Old Library. The Hall was originally a single-storey building with a pitched roof, however the roof was removed in 1452 and a flat ceiling installed above the Hall allowing a new library to be built (the Foundress provided in early statutes for a librarian, but the location of the original library is uncertain). The original Master’s Lodge consisted of a couple of rooms to the south of the Hall; before the Reformation the Master was unmarried. After 1549, when the College acquired more land, the Master’s quarters were extended south: the Master could now marry.

By the end of the fourteenth century the original First Court (now Old Court) was complete. There then elapsed over two hundred years before any further major development took place. In about 1614 work began on the area to the north of Old Court and Ivy Court came into being. By 1616 the two-thirds of the buildings on the Pembroke Street side of Ivy Court were completed, with the remaining third being added in 1670 when the land was acquired. Between 1659 and 1661 the south range of Ivy Court was built with money bequeathed by Sir Robert Hitcham; it is still known as Hitcham Building. At its western end on the first floor is the Thomas Gray room (where Thomas Gray and William Pitt were in turn to live); a doorway in the room’s west wall would have led to the Lodge.

The current Chapel owes its origins to Matthew Wren, Bishop of Ely. During his imprisonment in the Tower of London during the Civil War he vowed that, if he were released, he would build a new chapel for his College. This he did, choosing for the architect his nephew, and the Chapel of Pembroke, consecrated in 1665, is the first completed work of Sir Christopher Wren and the first chapel in Oxford or Cambridge in the classical style. The east end was extended by George Gilbert Scott Junior in 1880. The former chapel was converted soon afterwards into a library - this room with a magnificent plasterwork ceiling is now known as the Old Library. Adjoining Wren's chapel a cloister was built; the cloister records the names of 450 Pembroke men who fell in the wars of 1914-18 and 1939-45.

After the completion of the buildings in Ivy Court and the construction of the Chapel no further building work took place in Pembroke till the 1870s. In the mid 1800s some cosmetic alterations were made to the Hall, but in 1870 with the election of a new Master and undergraduate numbers increasing the College needed to expand. Alfred Waterhouse, architect, was asked by the College to suggest ‘the best way of providing for the College a group of buildings as efficient, convenient and architecturally effective as the site was capable of’. With such instructions Waterhouse’s plans envisaged rebuilding the entire College; not even the chapel would have been spared. In the end caution won the day and Waterhouse designed Red Buildings to the south of the Chapel on Crossinge’s Place, not part of the medieval part of the College. Red Buildings presented a new style to Cambridge – a red-brick building with a high tower in French Renaissance style. Waterhouse also designed a new Master’s Lodge (now N staircase) on the land known as Paschal’s Yard, east of Ivy Court, and the Old Master’s Lodge and the South range of Old Court were then demolished in 1874. This left the Hall looking ramshackle: after much debate, the Fellows agreed to its demolition, Waterhouse designing a new Hall (1875-6) – a single room with an open timber roof. Waterhouse’s final contribution to Pembroke was the current Library (1877-8). The view from Old Court towards the Library, beyond Wren’s Chapel and Waterhouse’s Hall, is particularly fine. Waterhouse’s radical renovation of the College might have continued had the Fellowship not reconsidered their choice of architect. In 1878 it was decided to demolish the now ‘Old Library’ but the Fellows decided the job should go to George Gilbert Scott Junior, rather than Waterhouse. Scott in 1879 advised the College to preserve the ancient buildings and delayed submitting plans for the remodelling of the Old Library. His tactic was successful: in 1880 the College reversed its decision on the Old Library and restored its use to a meeting room. Having saved the Old Library, Scott was also responsible for the expansion of the College towards the north east of the site, with the construction of New Court in 1881. The buildings of New Court combine allusions to the architecture of the previous three centuries with almost Arts and Crafts motifs in the groups of angels sculpted at the exterior corners and in some of the interior woodwork.

The steady increase in student numbers in the early twentieth century necessitated further extension of the College. The architect W.D. Caroe was commissioned to design two buildings. The first, Pitt Building (M staircase), is situated between Ivy Court and the then Master’s Lodge. The second building was a modest extension of New Court (O staircase), linking New Court to the Master’s Lodge. Caroe’s final task was to link his two buildings by an arched stone screen along Pembroke Street. Besides adding a decorative feature to this part of College there was a practical element to the bridge: connecting Pitt Building to New Court allowed students to pass between the two sections of College without needing to leave College (or trespass in the area that was then the Fellows' Garden). In 1926, dissatisfaction amongst the Fellows of the College with Waterhouse’s Hall led the Fellows to decide to remove the open roof. A flat ceiling was introduced, with two storeys of rooms above providing extra accommodation. At the same time the wall between the Hall and the then Fellows’ combination room was taken down, the latter being made into a high-table dais. In 1933 a new Master’s Lodge was built in the south-east corner of the gardens; this allowed for the conversion of the previous Lodge into additional accommodation. In 1954-7 Orchard Building was built on the part of the site of the Foundress’s orchard. In the 1960s and 1970s the College was extensively refurbished, to improve the standard of accommodation and to prevent decay. Even so, it remained impossible to house most junior members on site. So, in 1995, the College commissioned Eric Parry to undertake a large construction project to house 92 students in the south-east corner of the garden, in place of the Master's Lodge and Garden. Foundress Court was finished in 1997. The building also contains a new Master’s Lodge (Pembroke’s fourth Lodge), as well as two Fellows’ sets, bedsitting rooms adapted for use by disabled students, sound-proofed rooms for musical events and practice, an exercise room with multigym, a new computer room, a seminar room and an extra common room. In 2001 the Fellows gave the Cambridge architect Tristan Rees-Roberts the job of adding an extension and basement to the library to house the College’s rare book archive and to provide additional reading space, disabled access, a law library and a new seminar room. Further seminar rooms and Fellows’ studies were gained with the acquisition in 2008 of Chris Adams House on the corner of Pembroke Street and Free School Lane, with fine views of Caroe’s Bridge and the College roofscape. In 2011 the College engaged the architect Nicholas Ray to renovate the Waterhouse Hall, installing discreet twenty-first century technology and enlarging its capacity.